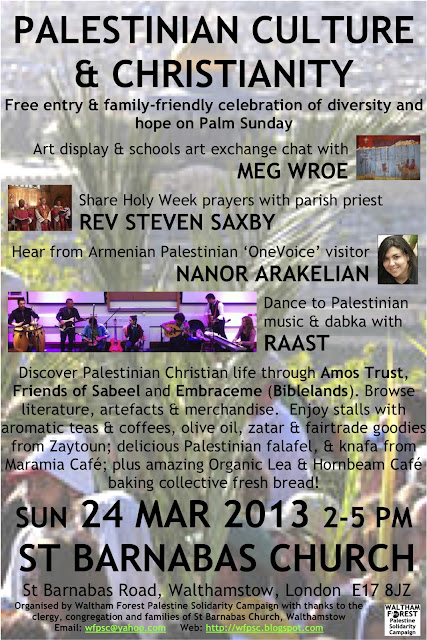 Posted by Waltham Forest Palestine Solidarity Campaign at 00:06 No comments:

Updated line-up for our amazing afternoon on Sunday!

Come along to discover what it means to be Palestinian - that Palestinians are one distinct and yet amazingly diverse people, standing together as Muslims, Christians and many other religions and none.  Learn from fascinating speakers, visual displays and literature; sample some delicious Palestinian food, music and dance; and celebrate Palestinian fortitude and humanity.

Bring your enthusiasm and a bit of cash to enjoy all the goodies!

Do join us for a wonderful and fascinating afternoon - all welcome!
Posted by Waltham Forest Palestine Solidarity Campaign at 00:05 No comments: 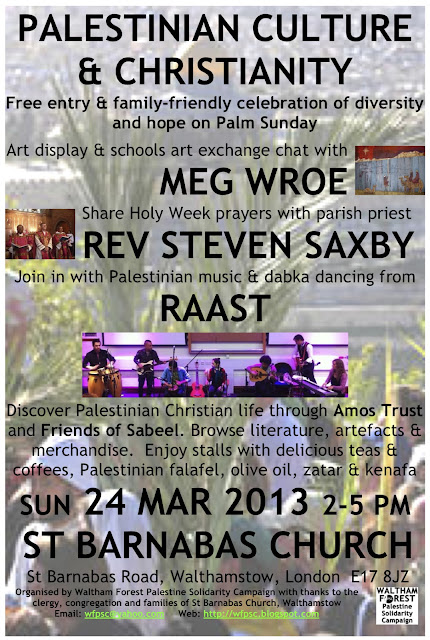 Posted by Waltham Forest Palestine Solidarity Campaign at 00:08 No comments:

Sat 9th March, at 11am - 2pm:
Street Stall at Tesco on Leyton High Road, just along from Baker's Arms.

Mon 11th March, at 7.30pm-9.30pm
Branch Meeting
Monthly catch-up at Hornbeam Centre, Walthamstow with a speaker from the anti-G4S campaign and other campaigning activities.

Some view Jesus' dramatic gesture as an act of resistance to encourage the local population to overcome of the oppressive colonial occupation of that time by peaceful means.  This has some resonance for Palestinians in contemporary times.  For believers, Jesus was dead and immortalised by the end of that week, and nowadays that sacrifice is eerily evoked in microcosm every Friday by the largely muslim Palestinian population, in the same occupied East Jerusalem streets and surrounding occupied villages and fields all over the West Bank, by Palestinian non-violent resisters trying to overcome another colonial occupation, suffering their own imprisonment and murder this time at the hands of Israeli occupation forces, at Bil'in, Ni'lin, Nabi Saleh, Jayyous, Salfit, Al-Khader, Hebron, Qalandia, Anata, Abu Dis, Nablus...  For some you can stretch the resonance as far as the Palestinian hunger strikers, like Samer Issawi, barely clinging on to life after over 200 days without food, as gentle and steadfast as ever.

This Palm Sunday we will be exploring the reality of Palestinian diversity: approximately 20% of the diaspora/shatat worldwide is Christian but fewer than 2% are left in Palestine today.

+ Despite Israeli propaganda to the contrary, Palestinian Christians are treated exactly the same as all Palestinians of any faith or none - with implacable discrimination by Israeli authorities.  Particularly with their Muslim brothers and sisters, Christian Palestinians are subjected to a vicious game of destruction and humiliation by Israeli Authorities, with monasteries and churches being partitioned off, graffitied and arson-attacked, families harassed, farms destroyed, livelihoods ended.

+ In the face of unusually outspoken UK Government intervention, currently near Bethlehem the famous Palestinian Cremisan vineyards and monastery are gradually being torn apart and the Christian community there decimated by Israeli civilian and military forces building an extension to the illegal Apartheid separation Wall - http://english.alarabiya.net/articles/2013/02/12/265931.html - http://www.guardian.co.uk/world/2012/oct/04/william-hague-vincent-nichols-west-bank-barrier

+ Again, in the face of international opprobrium, Recently in Gaza, Israeli authorities made no difference whom they 'carefully' bombed - Muslims and Christians alike were slaughtered - http://ocl.org/the-funeral-of-salem-paul-sweliem-in-gaza-city/ - http://www.euronews.com/2012/11/20/death-then-funerals-in-gaza/

Come along to discover what it means to be Palestinian - that Palestinians are one distinct and yet amazingly diverse people, standing together as Muslims, Christians and many other religions and none.  Learn from fascinating speakers, visual displays and literature; sample some delicious Palestinian food, music and dance; and celebrate Palestinian fortitude and humanity.
Do join us for a wonderful and fascinating afternoon! All welcome!

Also, take a look at this video about Israeli Apartheid - http://apartheidweek.org/ - read this latest example of Israeli secret services putting Apartheid into action against internationals - http://bit.ly/WnS1hE - and extraordinary Apartheid segregation in action in the West Bank - http://yhoo.it/WE9eOF

Many thanks
WFPSC Team
Posted by Waltham Forest Palestine Solidarity Campaign at 00:04 No comments: