(Photo: London Palestine Action)

Instro Precision, an arms company near Broadstairs (Kent), was occupied at 5am this morning to protest its sales to both Israel and Afghanistan. Four people are on the roof with banners to shut the factory down, with ten more on the ground, one of whom is locked to the fence.
A wide range of groups came together to make this happen, including: Brighton BDS, Brighton Palestine Action, Smash EDO, Stop NATO Cymru, Anarchist Action Network, East Kent CAAT, Swansea Action for Palestine (with a bit of support from us too). (Photo: London Palestine Action)
Instro is owned by Israeli arms company Elbit Systems, who make drones that are used to kill Palestinian civilians in Gaza. Optical and camera systems like those made at the Instro factory are also supplied by Elbit for use in drones flown over Afghanistan, as well as in Israel’s apartheid wall.
Elbit Hermes drones have been flown over Afghanistan and the new Watchkeeper drone, based on the Hermes, was deployed by the MOD last year. Although the Watchkeeper is ostensibly a surveillance drone, it has been displayed with missiles under its wings at the DSEi arms fair in London.
During last Summer’s ‘Operation Protective Edge’ attack last Summer, armed drones killed 830 Palestinians in Gaza. 85% of the drones used by the Israeli military are supplied by Elbit. Elbit’s share price rose in July off the back of the extensive use of its technology during Israel’s massacre,and the company recently reported a backlog in orders worth $6.2 billion. Elbit advertises its products as “combat proven”€, by which they mean their products are tested on the bodies of Palestinian civilians.
This is the second UK-based Elbit factory to be targeted by activists, after the successful occupation last summer of a drone engine factory near Birmingham.
One of the activists, Tom Anderson, a researcher from the UK research group Corporate Watch said:

We are here because we want to stop Elbit from supplying weapons which are used to massacre people in Gaza and Afghanistan. In 2013 I visited Gaza and spoke to the survivors of Israeli drone strikes. They told me that they wanted people to take action to prevent the companies that manufactured the drones that killed their loved ones from making equipment that will cause others to suffer the way they have.

Rida Abu Zneid, a young woman from Gaza who saw her sister ripped apart in front of her by a missile from an Israeli drone told Corporate Watch:

Why should they manufacture these weapons to kill innocent people? They should stop and close those factories. They only do it for the money. They get money and they cost our lives. If they only thought for a second about what these weapons can do they would stop. What do they feel when they see killed people on the TV? If they came over here and lived just one day in this area, and heard the bombing and the drones, what would they feel? I think they should live our experience€.

Elbit’s electronics are used in Israel’s apartheid wall, which stretches for hundreds of miles across the West Bank separating people from their loved ones, farmers from their fields and is intended to colonise more land for Israel and its settlements.
Lucy Marshall, another of the protesters said: “optical and camera systems like those manufactured at Instro Precision are supplied by Elbit for use on drones and also for camera systems on the apartheid wall. We are here to take action to prevent Israel from continuing its oppression and apartheid against the Palestinians.”
Palestinians have called on governments to impose an arms embargo on Israel, and not to buy arms from Israeli companies like Elbit. Abdulrahman Abunahel from the Palestinian Boycott, Divestment and Sanctions (BDS) movement said: “We call on governments around the world to do the very least they can to stop Israel from carrying out more massacres of our people by imposing a military embargo on Israel. Such steps would be in line with growing public support for our struggle and for the boycott, divestment and sanctions (BDS) campaign”. Letter in The Guardian - 700 UK artists: We won't work with Israeli institutions

Posted by Waltham Forest Palestine Solidarity Campaign at 19:21 No comments: 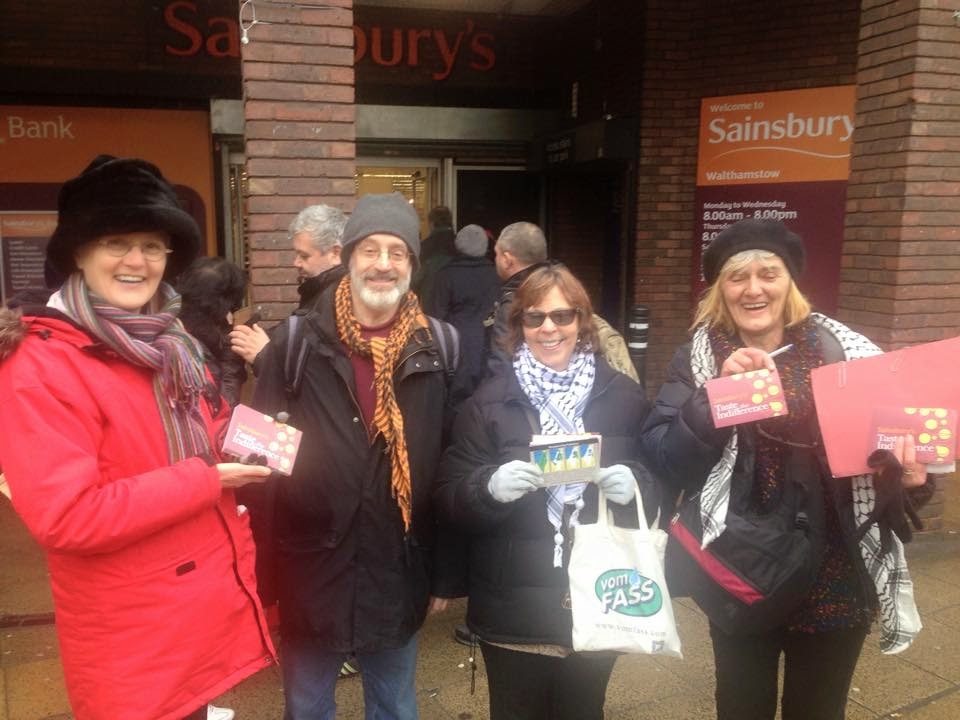 The picture above was taken by one of the friendly local residents and hopefully a future WFPSC activist.

Inspite of a very cold and wet weather there was lots of interest in our action. We chatted with many people and we hope to have several new activists we met today, joining us.

Next Sainsbury's action will be on the first Saturday in March (the 7th) 11am - 1pm, more info about the venue nearer to the date.
Posted by Waltham Forest Palestine Solidarity Campaign at 22:00 No comments:

Sainsbury’s uses suppliers that trade in produce from Israeli settlements in Palestine, which are illegal under international law .


Few years ago The Co-operative decided that, in line with their ethical policy, it would no longer use any suppliers sourcing from the illegal settlements.

Please, take action to pressure Sainsbury’s to follow the Co-operative’s example and stop trading with suppliers which profit from the occupation of Palestine.

Also, on the same day, a short walk away, WFPSC will have a regular monthly stall in Walthamstow Square, between 11am and 2pm. Please, pop over for a chat, get up-to-date information about life in the occupied Palestine and stock up on fair trade Palestinian farmers produce.

See you there!
Posted by Waltham Forest Palestine Solidarity Campaign at 13:37 No comments:

At the 2015 AGM of PSC Ray Goodspeed from WFPSC moved following motion. It was carried without discussion.

"Palestinian LGBTQ people campaign for their specific rights as part of the wider struggle for their human and national rights as Palestinians. Organisations such as Al-Qaws and Aswat PSC, as part of its support for BDS, opposes attempts by Israel to use its state-funded propaganda machine to present itself as a liberal, democratic state by virtue of its record on LGBTQ rights (“pinkwashing”) as a way of distracting attention from its illegal occupation of Palestine. Pinkwashing trades on Islamophobic stereotypes – that Muslims, Arabs and Palestinians are all violently homophobic. have called for support for campaigns against pinkwashing as part of the wider campaign by Palestinian civil society for BDS.
In Britain the “No to Pinkwashing” group was set up in 2012 by activists including PSC members to answer this call and it has worked closely with PSC since then.
This AGM resolves to support “No to Pinkwashing” and to encourage PSC branches, affiliated Trade Unions and other affiliated organisations to:


Posted by Waltham Forest Palestine Solidarity Campaign at 15:59 No comments: