The public WFPSC Branch meeting on Wednesday 17 December in Hornbeam's Cafe is cancelled. Next meeting will take place as planned on 21 January 2015.
Posted by Waltham Forest Palestine Solidarity Campaign at 20:48 No comments:

London Events
·         Gabrielle Farah’s, Bringing Home the War – free Art Exhibition at the P21 Gallery until 17th January.
·         Open Bethlehem, a deeply moving film by Leila Sansour is now showing at screenings nationwide. Please support this important piece of work. If you would like to book tickets, please visit www.palestinecampaign.org/events/uk-screenings-open-bethlehem/

Last month the Israeli cosmetics chain Sabon opened a store in Covent Garden and groups across London answered the call by Palestinian civil society to continue to boycott Israeli goods.
Sabon however is not just any Israeli company, it has directly profited from Israel’s policy of ethnic cleansing as a company exploiting the Dead Sea minerals belonging to Palestine. While Palestinians are denied access to their own natural resources, Sabon continues to rack up the profits at their high end stores. Sabon’s products are made in the city of Kiryat Gat, built on the site of 2 demolished Palestinian villages after the residents fled for their lives. The Israeli government continues to illegally deny the right of these refugees to return to their land and until they do so, Sabon are complicit in these crimes.
Waltham Forest PSC fully supports boycotting Sabon’s flagship Covent Garden store as part of the wider boycott movement and while they continue to make profits of stolen minerals in breach of international law and the right of return is refused we will continue to make our voices heard.
The Darker Side of Hewlett Packard
After significant successes against Veolia, G4S and Sodastream, PSC are additionally turning their attention to Hewlett Packard as the technological might behind Israel’s oppression and human rights abuses of the Palestinian people.
HP continue to make huge profits by providing the IT systems for Israel’s illegal naval blockade of Gaza, the technology used to deny free movement in the West Bank through the daily humiliation of check points and many of the essential services that allow the illegal settlements to operate.
We urge you to sign the PSC pledge at www.palestinecampaign.org/hp-pledge/ to not buy HP products until they end their complicity in the illegal Israeli occupation. If you wish to become more involved in any of our campaigns please do contact us.
Israel’s Nationality Laws – Actions of an Apartheid State?
It has long been claimed that Israel is the only true democracy in the Middle East, a country where minorities can live with greater freedoms than practically anywhere else in the world. Israel’s new Nationality Law that is currently being debated shines a light on the true nature of the Netanyahu government and the increasingly racist and discriminatory measures being committed to law.
This apartheid legislation would delist Arabic languages as official languages of Israel as well as enshrining Jewish religious law as the source and inspiration of national law, effectively superseding democracy and culture-neutral law with religious law. Israel has gone even further by planning further legislation to ban the Palestinian flag as a flag belonging to the ‘enemy.’ The intention clearly being to define Israel as a solely Jewish state by supressing the culture and values of anyone else.
Violence continues with no end in sight

For weeks Western media outlets have been giving significant airtime to the Israeli casualties of the latest escalation in violence centred in East Jerusalem and the West Bank. In the spirit of all life is equal, I would like to draw your attention to some of the Palestinian casualties.

Saleh Mahmoud, aged 11, was shot in the face, permanently blinding him. Yousef al-Ramouni, aged 32, was hung in the back of his own bus. A 10 year old boy was shot in the neck by the IDF in Gaza for allegedly ‘scouting’ Israeli positions. Fadi Radwan, aged 22, was attacked by a gang of settlers and stabbed multiple times. Mahmoud Qalaweh, aged 23, set on fire. Ibrahim Mahmoud, aged 16, shot by an Israeli settler. Mayar Natsheh, aged 10, suffered a cracked skull when shot by a rubber coated steel bullet. Razan Alhalafaqi, aged 11, died after being refused permission to leave Gaza to receive life-saving medical treatment.

How Does the World View Israel?

The annual BBC World Service poll published in June 2014 charts the opinions of respondents from around the world and whether their views are mainly positive or negative on selected countries.

For the third year in a row Israel were ranked in the bottom 5 in the world with only Iran, North Korea and Pakistan scoring worse. Globally only 23% of those surveyed around the globe felt that Israel’s influence on the world had been mainly positive. In Europe the figure was even worse with Germany showing only 11% and France 21%. In fact the only countries surveyed that showed a greater than 50% positive view of Israel were the United States, Ghana and Nigeria. With the UK having only 19% positive and an astounding 72% negative view, with this is mind why does our government continue to supply arms and provide diplomatic cover for Israeli atrocities?

If you are interested in getting involved with Waltham Forest PSC, or of course just want to comment on the newsletter, please contact us on wfpsc@yahoo.com or you can write to WFPSC, Hornbeam, 458 Hoe Street, Walthamstow, E17 9AH.
Posted by Waltham Forest Palestine Solidarity Campaign at 20:41 No comments: 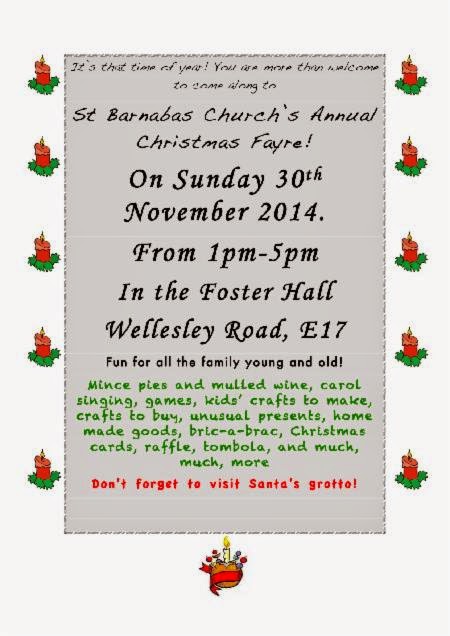 This year's St Barnabas Christmas Fayre was a great community event , with various stalls selling crafts and other beautiful things, manly made by local people and sold in aid of different charities.

St Barnabas vicar Steven Saxby organized a video link with a Christan family in Bethlehem, which made this years Fayre extra special.

We all had a unique opportunity to sing Christmas Carols with  our Bethlehem friends and hear them sing Carols to us.

The mother of the family told us about their lives under the occupation and how happy they were to share with us in the Christmas celebrations. 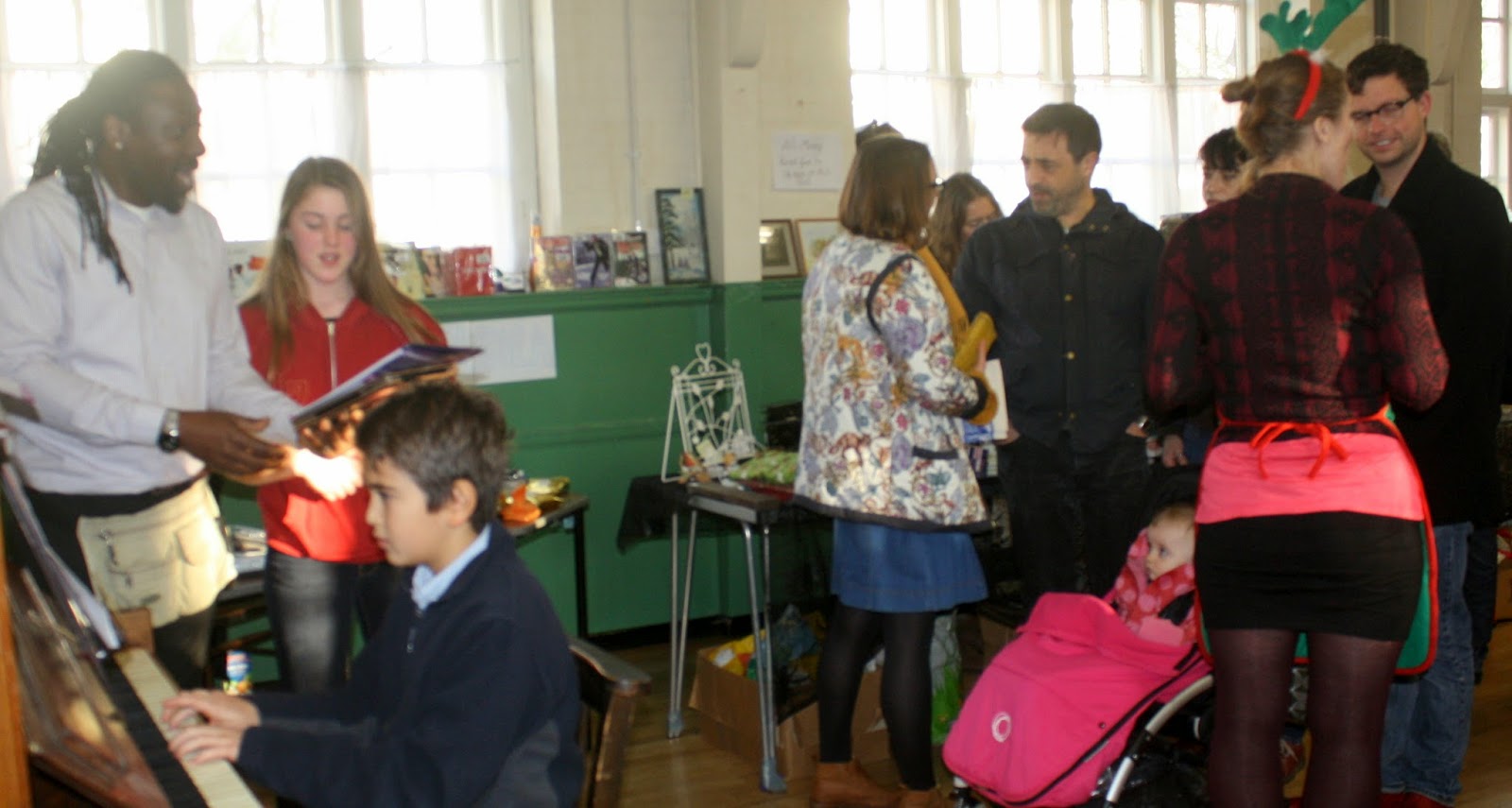 Streams of people went through the Church chatting, shopping and enjoying hot drinks and cakes. 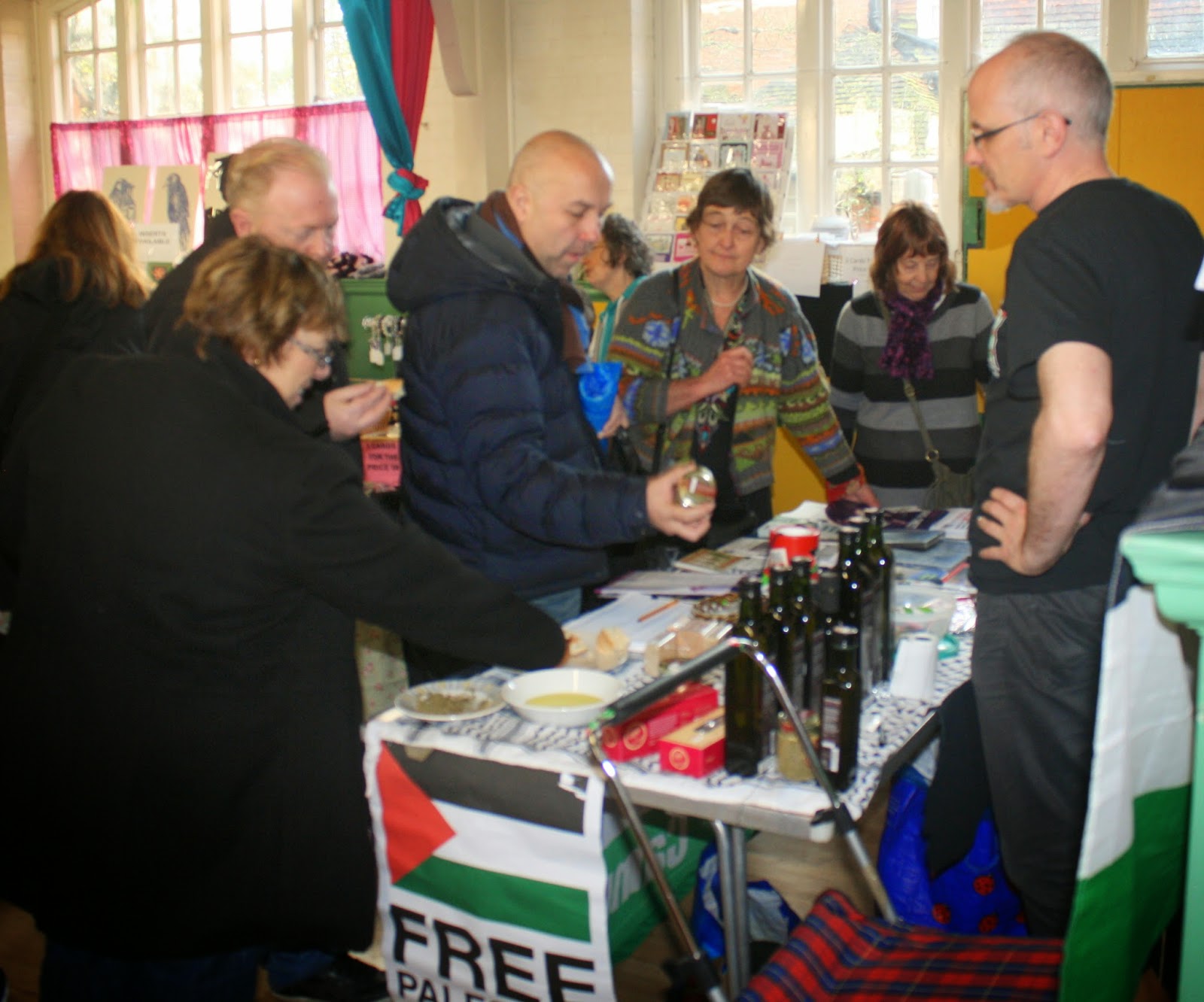 WFPSC stall was well visited and our information leaflets and the Palestinian produce flew off our stall and we are glad that they will find place on many Waltham Forest Christmas tables.

Thanks to Steven and his wife for organising the Fayre and making us all so welcome.


Posted by Waltham Forest Palestine Solidarity Campaign at 12:58 No comments: 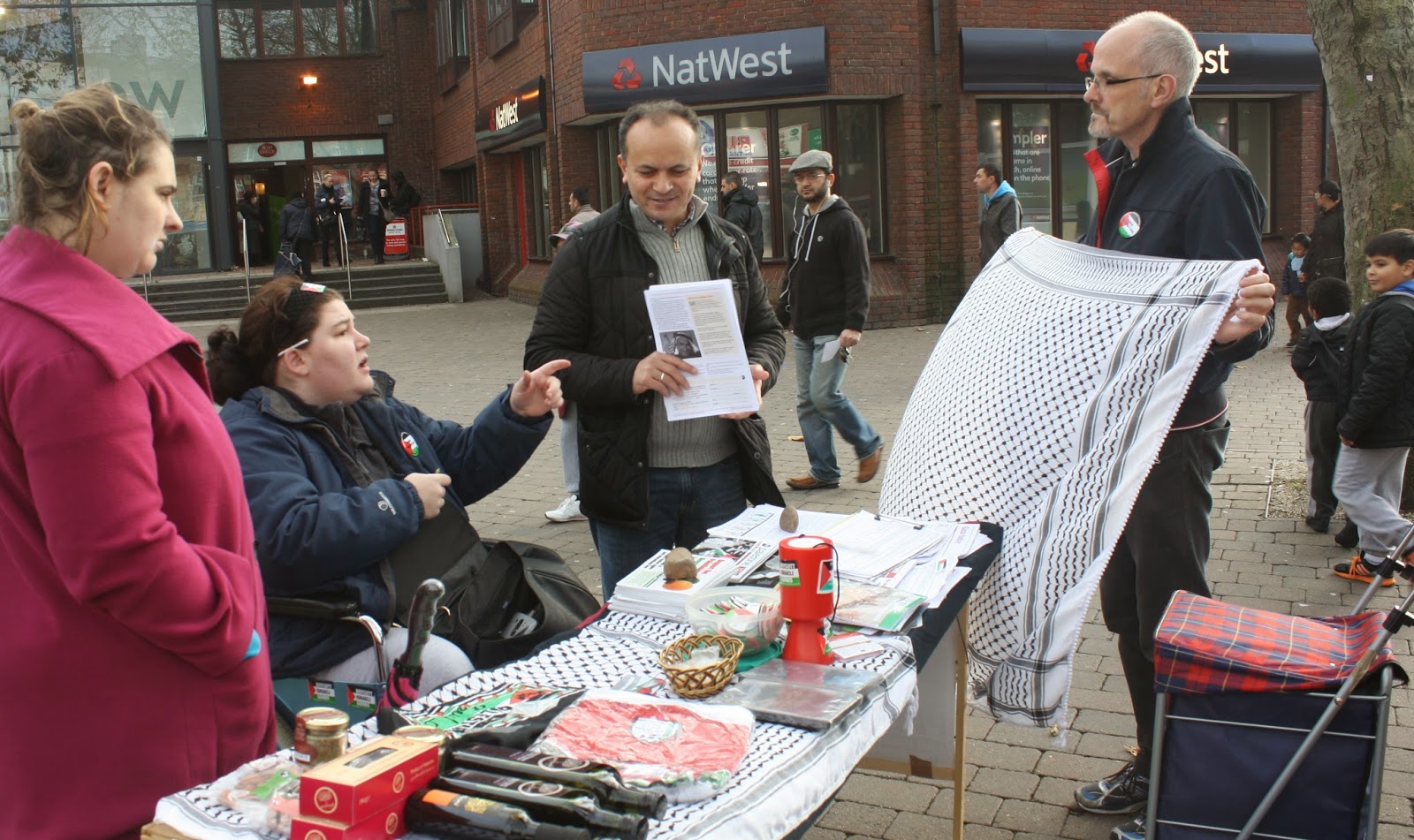 Another successful stall with lots of market shoppers popping over to talk about the latest events in Palestine and local solidarity events.

We have a dozen new contacts of people who wanted to keep in touch or become WFPSC activists. The next stall is scheduled to take place on Saturday 13 December between 11am and 2pm in the South of the Borough. Watch this space for the exact location and visit us for a chat, to get any last minute Christmas presents and stock up on Palestinian olive oil, zatar, almonds etc. to last you over the festive season. 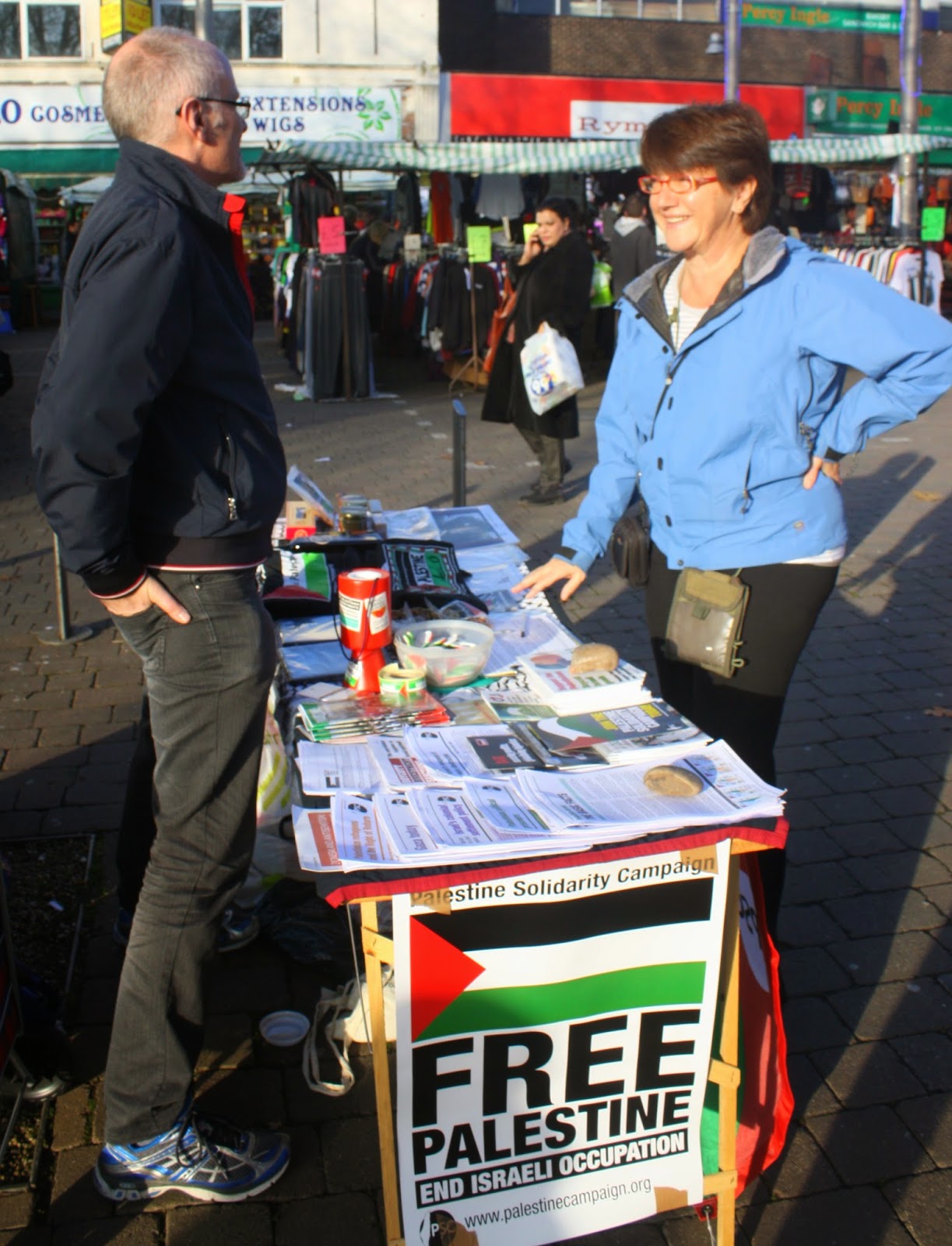 .
Posted by Waltham Forest Palestine Solidarity Campaign at 09:14 No comments: