URGENT ACTION - TELL OUR COUNCILLORS: 'NO' TO VEOLIA!


PLEASE URGENTLY CONTACT Waltham Forest's representatives on the NWLA Board:
- CLLR CLYDE LOAKES - cllr.clyde.loakes@walthamforest.gov.uk
Mobile 07812 160124
- CLLR AFZAL AKRAM - cllr.afzal.akram@walthamforest.gov.uk
Mobile 07799 417418
TELL THEM "NO" TO VEOLIA!
DON'T TRASH OUR BOROUGH:
BIN VEOLIA INSTEAD!
As No2VAG campaign puts it: "Join hundreds of residents from across the 7 boroughs who have already communicated their concern about Veolia's appalling practice history, for example guilty of explosions in 2007 that put residents in other parts of the UK in considerable danger, closing the M6 & M55; to Veolia's grave misconduct in aiding and abetting the Israeli violation of international law and human rights of the Palestinians.  No one must be able to say that the NLWA awarded these contracts in ignorance of the complicity of one of the bidders with flagrant and ongoing war crimes."
Tell Clyde and Afzal you want Waltham Forest to have nothing to do with Veolia because:
- Local government regulations allow councils to exclude companies from public contracts if they are guilty of 'grave misconduct'.  Veolia operates the Jerusalem Light Rail, the purpose of which is to consolidate the link between the illegal Israeli settlements with Israel. The Jerusalem Light Rail has been criticised as illegal under international law by the UN Human Rights Council.
- When Veolia advertised for drivers for the Jerusalem Light Rail, it stipulated that applicants must have served in the Israeli military and be able to speak Hebrew to mother tongue standard.  This blatant form of discrimination, which excluded Palestinians, including those who are citizens of Israel, from applying for the jobs, is not compatible with the anti-discrimination policies of UK local authorities.
- Veolia operates the Tovlan landfill for rubbish from inside Israel in an illegal Israeli settlement in Occupied Palestinian Territory.  Interviews with the Palestinians working at the landfill have revealed terrible working conditions - below minimum wages and a lack of safety equipment and procedures (more info available on request).
- Veolia subsidiary YARV Sherutei Noy 1985 was recently awarded a contract to collect waste from Israeli military bases in occupied Palestinian territory.  Veolia has now partnered with the Israeli military - which stands accused of committing gross violations of international humanitarian law - and is assisting it to continue its illegal occupation of Palestinian territory.
- Veolia operates bus services along settler-only roads in occupied Palestinian territory. When the Palestinian Freedom Riders boarded a settler-only bus earlier this year, they were dragged off and arrested, simply because they were Palestinians. 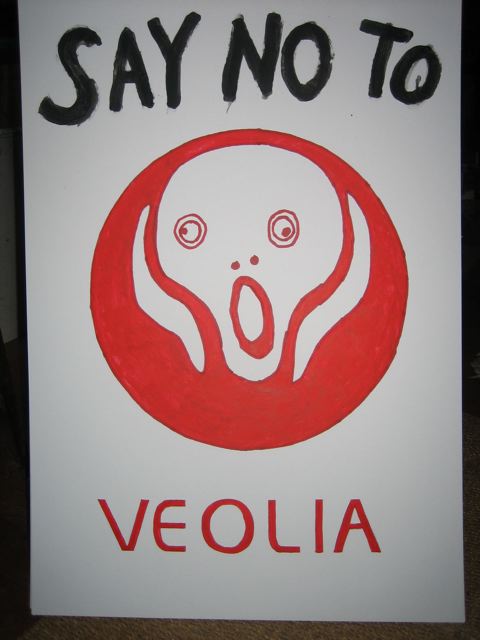