The action organised by Waltham Forest residents, activists of the Waltham Forest Palestine Solidarity Campaign on Saturday 5 April, was reported in the local online Guardian, covering a number of local authorities in the East London and Essex.

The report appeared briefly, than disappeared, after topping the list of the most read articles for that day, because, we were told, the editor wanted some additional information to be included.

It was finally re-published online on 8 April  and you can see it below cut and pasted. Far bellow you will find the link, so you can comment, 'like' it and share it on the Guardian site. 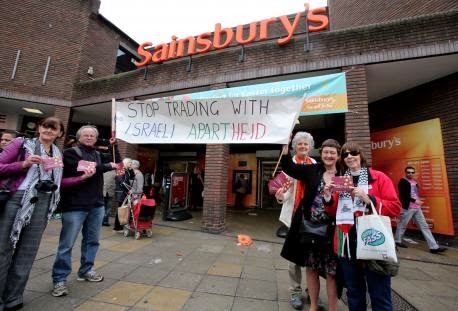 
Campaigners accused Sainsbury’s of trading with companies which participate in Israeli violations of international law.
The Waltham Forest Palestine Solidarity Campaign claims firms producing citrus fruits, mangoes and dates for Sainsbury's grow food in illegally occupied areas of Palestine.
It is also claimed companies operating in illegal settlements contribute to the destruction of Palestinian agriculture.
Sainsbury’s says none of the products it sources from Israeli suppliers are grown in illegal settlements.