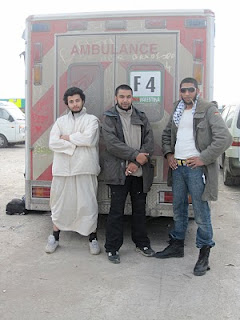 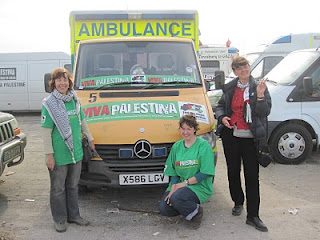 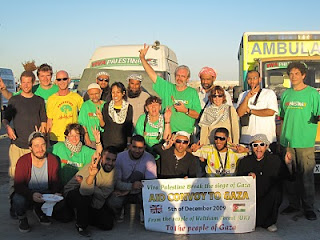 With huge apologies for the delay in updating you, it is with great delight we can say that WFPSC and Lost Voices of Gaza contingents on the Viva Palestina convoy have successfully delivered their aid and visited Gaza!
Jo, Rada and Ellie, along wit
h Tox, Hamza and Sa'id arrived in Gaza with the rest of "F team" (show in the group photo) in the early hours of the morning of 6th January, or was it 7th January. Time had merged into one long day by then and the date was pretty immaterial. The fact is, we had arrived! 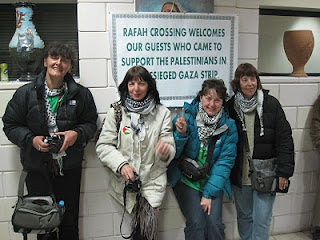 Although we had no idea when we arrived, in the end, we only had a fleeting 36 hours in Gaza - basically one day - to do everything we had arranged, including seeing families and friends of Gazans back in the UK, and making links with local community groups. So, basically, we only got the tiniest fraction done of what we had planned.
That said, we did manage to get out and about, rushing to see as much of Gaza as we could. The Lost Voices boys made it to a hospital and other community organisations, Rada and Jo attended two enormous receptions and spent quality time with our host family and Ellie made it to an archeological museum and then met a family living in tents/makeshift housing near the Eretz crossing. 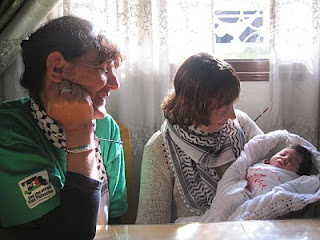 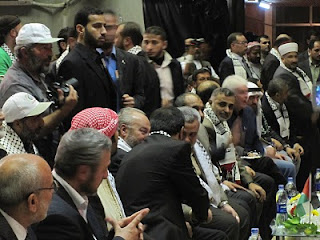 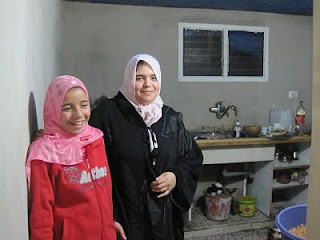 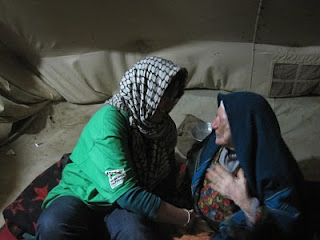 Despite the difficulties we had with the Egyptian authorities, the riot at El Arish and the deportation fiasco, we had a brilliant time in Gaza, and the Gazan people made us so welcome we all have homesickness for Palestinian hospitality! At every turn, even though the Palestinians have barely enough to feed themselves, we were pressed with food, tea, coffee, more food, more tea, more coffee, delicious puddings, sweets, more coffee - we had to beg not to eat at 1.30am... And all the time huge amounts of merry talking - about anything and everything - a real exuberance for life and love of other people: a deeply cultured, humane and mature way of life which we adored.
We all have heaps of photos and stories to tell. With any luck we will get a branch meeting together (1st or 5th Feb?) for WFPSC members and onlookers, just to sort out what we, as WFPSC need to do next. There is the PSC AGM coming up on 6th Feb, at which we need to speak up and with any luck there will be a formal VP Convoy feedback session (later in Feb?), to help us plan better for future such convoys and siege-breaking activities. But what we really want to do is hold a public meeting for your Waltham Forest convoy members to share their stories with you, so you can learn how we coped, how we nurtured and protected your aid that we were carrying, how we made hundreds of Palestinian friends along the way in all the diaspora countries and how we handed over the aid and whatever cash we had to families and community groups on arrival in Gaza.
We've had some media coverage, both on the way and on our return. Buy the Waltham Forest Guardian Newspaper - we're in this week's (Thurs 21 Jan) edition! Also, the same paper did an on-line article on us. Jo and Rada have appeared in a couple of international newspapers, we've all appeared on lots of Press TV bulletins, IHH (turkish NGO) broadcasts and Al Jazeera. Ellie's also done a live Radio Johannesburg interview and a live TV debate for Medi1stat, Moroccan 24-hour news. So we have not been silent!
In the meantime, if you have any questions, get in touch on wfpsc@yahoo.com
Posted by Waltham Forest Palestine Solidarity Campaign at 16:59 No comments: