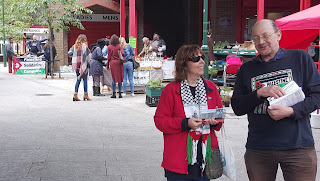 Lots of strong support was expressed for ‪#‎palestine‬ and ‪#‎bds , with people stating interest to join us. Reading the label and not buying Israeli dates for the forthcoming Ramadan was the hot subject. 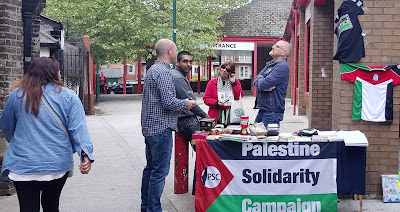 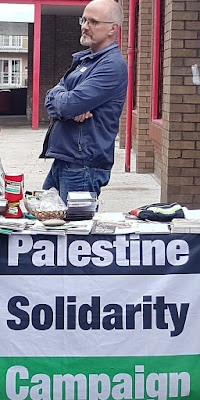 Posted by Waltham Forest Palestine Solidarity Campaign at 15:37 No comments:


As you will know HP is a key target for the Boycott National Committee (BNC) and one of the priorities of the Palestine Solidarity Campaign which says:

‘….The objective of the Day of Action is to highlight HP’s deep participation in Israel’s brutal Occupation and its apartheid system and to encourage more and more people to sign the pledge not to buy HP products.
Details of the day of action, a new website dedicated to the campaign and a range of resources will be available soon. Stay in touch for more information very soon.
Background HP is the second largest investor in Israeli Information Technology (IT). Its technology and equipment facilitate both the illegal Israeli occupation and apartheid, especially through the development of its biometric system used for population and territorial control and surveillance of Palestinians both inside Israel and in the occupied Palestinian territory.
• The Checkpoints – HP’s Basel system is installed at the Israeli military checkpoints in the occupied West Bank. This deprive Palestinians of freedom of movement in violation of international law. When the Presbyterian Church wrote to the company about this, it replied saying that this: ‘reduc(es) friction between Palestinians and Israeli soldiers at barrier checkpoints while expediting the passage process’.[1]
• The Israeli Military – HP provided the IT infrastructure for the Israeli Navy, thereby helping to enforce the blockade of Gaza, and supplies the computer systems for the Ministry of Defence.
• The settlements – HP employs settlers in Beithar Illit and provides services and technologies to two of the largest in the occupied West Bank (Modi’in Illit and Ariel).
• Biometric ID cards – occupied territories – HP facilitates Israeli control of the Palestinian population of the occupied West Bank with its biometric identification of Palestinian civilians. The ID numbers for these Green cards that bear the PNA insignia are assigned by Israel, which controls the Palestinian population registry.
• Biometric ID cards – citizens of Israel – HP facilitates Israeli apartheid with the development of its biometric system that differentiates between Palestinian and Jewish citizens of Israel, among other ethnicities and religions. In other words, “this system takes to a new level of technology the stratification of citizenship rights.”
• Certainly in 2012, the HP Labs based at Technion University (Haifa) was its largest centre for research and development. (Technion itself is considered highly complicit in the Occupation and the Siege and attacks on Gaza being a base for research and development for a wide range of military equipment, with close links to Rafael Advanced Defence Systems and Elbit Systems. (working mainly on surveillance and attack drones.[2]Further information is available from ‘Who Profits’.[3]
Sign the pledge now: www.palestinecampaign.org/hp-pledge/
[1] https://electronicintifada.net/blogs/adri-nieuwhof/hp-spins-israeli-checkpoints-role-reducing-friction-Palestinians
[2] http://www.alaraby.co.uk/english/features/2014/11/9/the-technion-an-elite-university-for-israeli-student-soldiers
[3] http://whoprofits.org/company/hewlett-packard-hp ....’

Posted by Waltham Forest Palestine Solidarity Campaign at 23:52 No comments: