Roger Waters to Robbie Williams: “Your decision to play in Tel Aviv gives succor to Netanyahu and his regime, and endorses their deadly racist policies”

Roger Waters to Robbie Williams: “Your decision to play in Tel Aviv gives succor to Netanyahu and his regime, and endorses their deadly racist policies”
Posted by Waltham Forest Palestine Solidarity Campaign at 02:20 No comments:

Posted on  7 April 2015  by jews4big
Letters in today’s Guardian (April 6) highlight the growing threat to artistic and academic freedom by pro-Israel lobbyists seeking to criminalise criticism of the Zionist state.
Playwright Caryl Churchill, a leading signatory of the UK Artists’ Pledge for Palestine, noted the alarming conjunction of a threat to funding of arts institutions that decline Israeli state links and cancellation of an academic conference planned for April 17-19 at the University of Southampton after Zionist pressure.
The organisers have launched a legal challenge to the decision to cancel. See lower down this post for a message from Southampton Students for Palestine explaining the campaign to raise funds to support the challenge.
“All Charlie Hebdo?” wrote Churchill, alluding to the collective outpouring of official outrage at the murder of cartoonists in France in January. “Except when freedom of expression means freedom to criticise Israel.”

Culture Secretary Sajid Javid’s comments on Israeli sponsorship ‘breached the principle of an arms-length relationship between the government and the arts’, writes playwright Caryl Churchill. Photograph: Dominic Lipinski/PA
Another letter, from Professors Hilary and Steven Rose, prominent proponents of the academic boycott, said the university had “shamefully capitulated to pressure from the pro-Israel lobby”, as evidenced by the statement issued by the university authorities.
The university had initially listened to the hundreds of academics who rallied in support of the conference despite a barrage of attacks from a roll-call of Tories and Israel lobbyists, among them Communities Minister Eric Pickles, the Board of Deputies of British Jews and the Zionist Federation.  Pickles & Co alleged that the conference was a one-sided antisemitic rant against Israel’s “right to exist” and threatened demonstrations and disruption if it went ahead. This seems to have been what forced vice-chancellor Prof Don Nutbeam to announce the cancellation on unconvincing “health and safety” grounds.
A letter the Guardian declined to publish,  submitted by Tony Greenstein on behalf of J-BIG (full text at the bottom of this post) contrasted this cowardice with the fate of Danish film director, Finn Noergaard, killed at a cafe in Copenhagen in February while defending the right to debate freedom of speech.
The organisers of the three-day Southampton conference, titled International Law and the State of Israel: Legitimacy, Responsibility and Exceptionalism, had assembled an array of expert participants from around Europe, North America and the Middle East, including many Jews.   If the conference programme lacked representation from Israel’s friends, it is because invitations issued by the organisers to defenders of Zionism were rejected by the recipients.
As explained by Prof Haim Bresheeth on the website of the British Committee for the Universities of Palestine (BRICUP),  Israel and its apologists are resorting to all possible means to prevent the issues addressed by the conference being aired.
One of the conference organisers,  engineering professor Suleiman Sharkh, a Palestinian from Gaza, explained its importance.
“International law was responsible for our misery. It was used to legalize the theft of our homes and it continues to be used to legalize the ongoing oppression of my people by the State of Israel. The questions asked by the conference are therefore questions that I have been asking all my life. They are important questions that need to be answered.”

Information from Southampton Students for Palestine.
Subject:  Conference donations: update & important information
Q1: What is the final university decision in relation to the conference?
The university’s initial decision to withdraw its consent was appealed by the organisers but the internal appeal was rejected by the Vice Chancellor and the withdrawal of consent was confirmed. University’s public statement:http://www.southampton.ac.uk/news/statements.page#.VRxbTkFmtTw.twitter
Q2: Are you collecting donations now or shall we wait further notice?
Donations are being collected now. Please see information on donations below.
Q3: Does this mean that you are proceeding with legal action?
Yes. Legal action has been initiated today. Please see official organisers’ statement attached hereby. Also see: https://www.middleeastmonitor.com/news/europe/17842-academics-pursue-judicial-review-over-cancelled-israel-conference
Q4: Why are we making donations to Student Palestine Solidarity/Students for Palestine?
You are  not making donations to these organisations. They are only carriers of the funds to help facilitate payment since we are not using any personal accounts to collect donations.
* Information on donations*
Many thanks to those who have already sent their donations and sent me a confirmation email in that regard, I can confirm that they have been received.
If you are yet to donate, please find bank/paypal details below.  Kindly consider a bank transfer as a first option (if possible) since paypal are deducting a fee on each incoming transaction. If a bank transfer is not possible then please feel free to make your donation via paypal.
UK bank transfer:
Account name: Students for Palestine Southampton
Account number: 26617360
Sort Code: 30-90-34
International bank transfer:
Bank: LLoyds Bank
IBAN (for International Transfers Only): GB84 LOYD 3090 3426 6173 60
BIC (for International Transfers Only): LOYDGB21148
Paypal:
http://www.studentpalestinesolidarity.org.uk/donate/
J-BIG LETTER SUBMITTED TO THE GUARDIAN
The decision of Southampton University to cancel a Conference on Israel and the State of Israel [University event questioning Israel’s right to exist is cancelled, Guardian 31st March] is a disgraceful surrender to powerful bullies.  Zionist groups have a long track record of trying to ban anything they disagree with, given their inability to defend the indefensible.  The normal response is to stand up to them.
It was less than three months ago that four million people and world leaders marched in France in support of freedom of speech, in the wake of the murder of the journalists of Charlie Hebdo.  Amongst them was David Cameron.  If Cameron was sincere he would sack Eric Pickles MP from his government for having lent his support to the call to ban an academic conference.
The use of health and safety as the pretext to cancel the conference is absurd and illogical.  Is it really being suggested that Southampton University was incapable of protecting those attending the conference?  The Police were quite confident they could deal with any threats.
Southampton’s charter includes a commitment to secure academic freedom. With this decision it has been shown to be worthless.
It was barely a month ago that Danish film director, Finn Noergaard, was killed [while defending the right to] debate [on] freedom of speech.  The actions of Southampton University’s Vice Chancellor Don Nutbeam and the university administration in failing to uphold the basic norms of a democratic society are an act of abject cowardice.  If they have any integrity left they should collectively resign.
Yours faithfully
Professor Haim Bresheeth
Mike Cushman
Deborah Fink
Tony Greenstein
Professor (Emeritus) Moshe Machover
Naomi Wimborne-Idrissi
(Dr) Les Levidow
Posted by Waltham Forest Palestine Solidarity Campaign at 01:51 No comments:

Protest against Sainsbury's profiting from occupation of Palestine, Saturday 4 April 2015 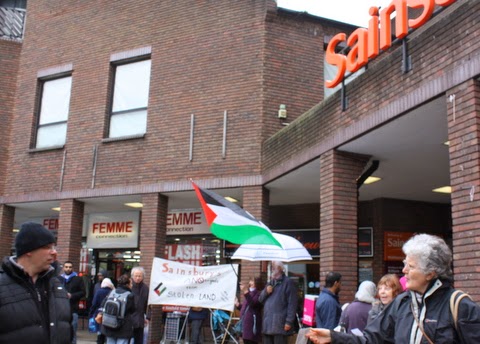 Earlier today we protested in front of the Walthamstow market Sainsbury's and spoke to many people about fruits and veg from the illegal settlements on the stolen Palestinian land being on the Sainsbury's shelves across the UK. 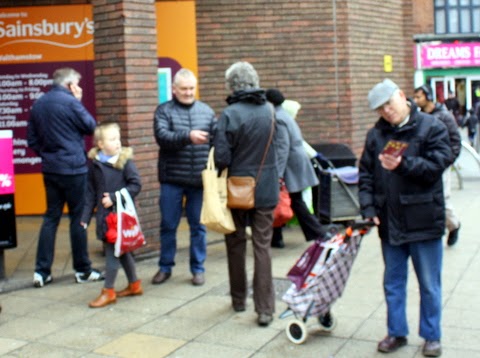 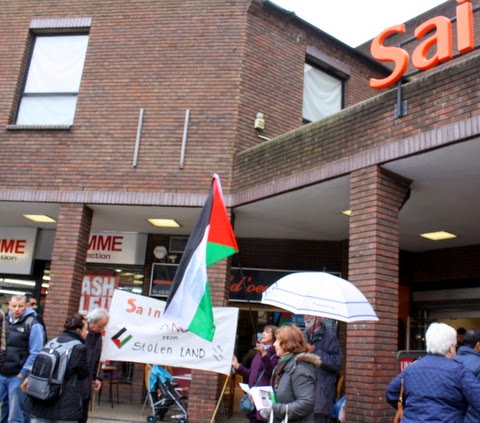 Some of them went into the shop to complain, others emailed Sainsbury's HQ. We expect to have several new members we met today at the market who said they would like to keep in touch.

Our next Sainsbury's action will be on the first Saturday in May (the 2nd) and the location will be confirmed nearer to the date. 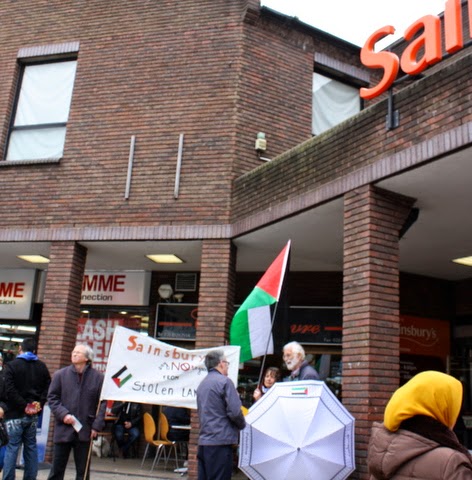 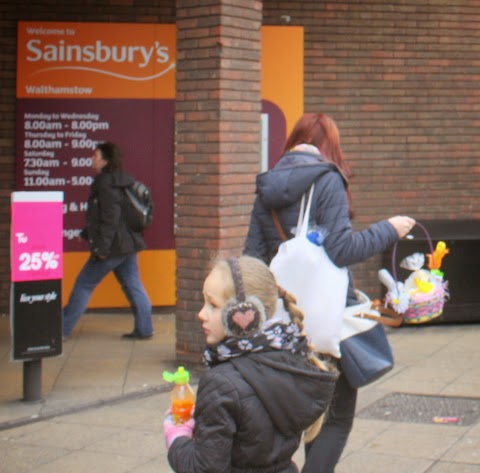 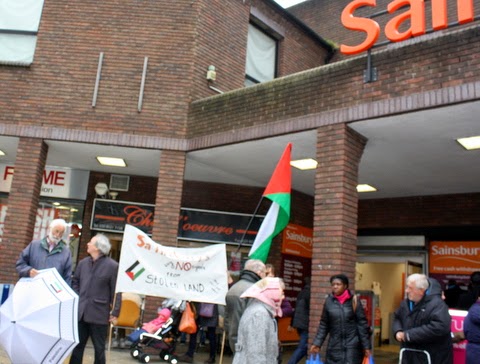 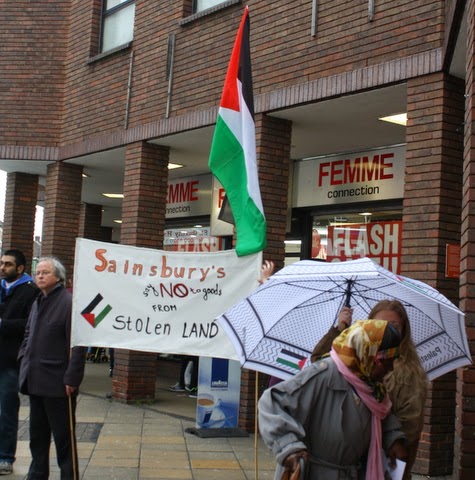 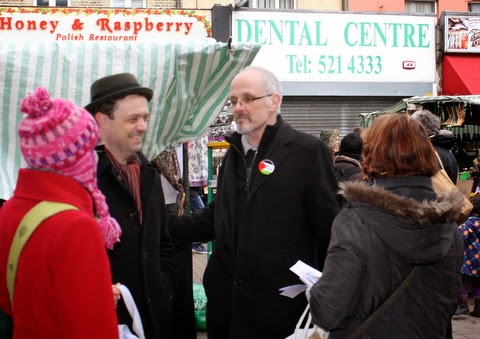 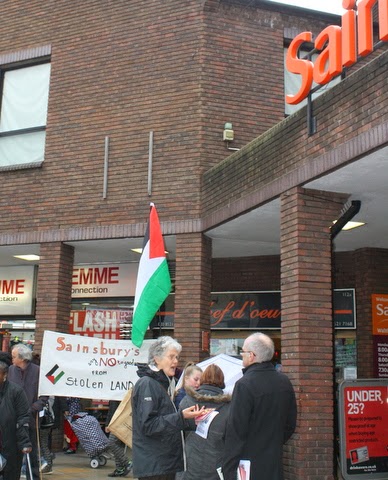 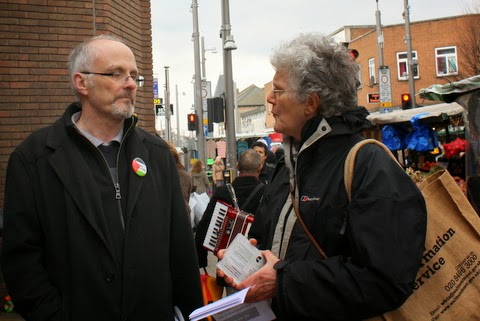 Posted by Waltham Forest Palestine Solidarity Campaign at 19:16 No comments: