.
Since 1967, Israel has built 37 illegal settlements in the Jordan Valley (Occupied Palestine), evicting nearly 80% of the Palestinian people who owned and farmed that land. These settlements depend for survival on Israeli export companies, such as Mehadrin and EDOM.
Sainsbury’s continues to trade with these companies, despite a 2 year-long campaign telling them about this crime.
International Law and goods from Stolen Land:
It is illegal for Israel to exploit for its own profit land which it is occupying by force, like the Jordan Valley. Sainsbury's knows this, but still does business with companies that make Israel’s crimes possible.

How ethical is Sainsbury’s?
A recent survey by “Ethical Consumer” put Sainsbury’s next to the bottom in the UK supermarkets on the basis of its ethical conduct. It came below Tesco, Aldi and Lidl and was just above Asda.
·
What can we do? 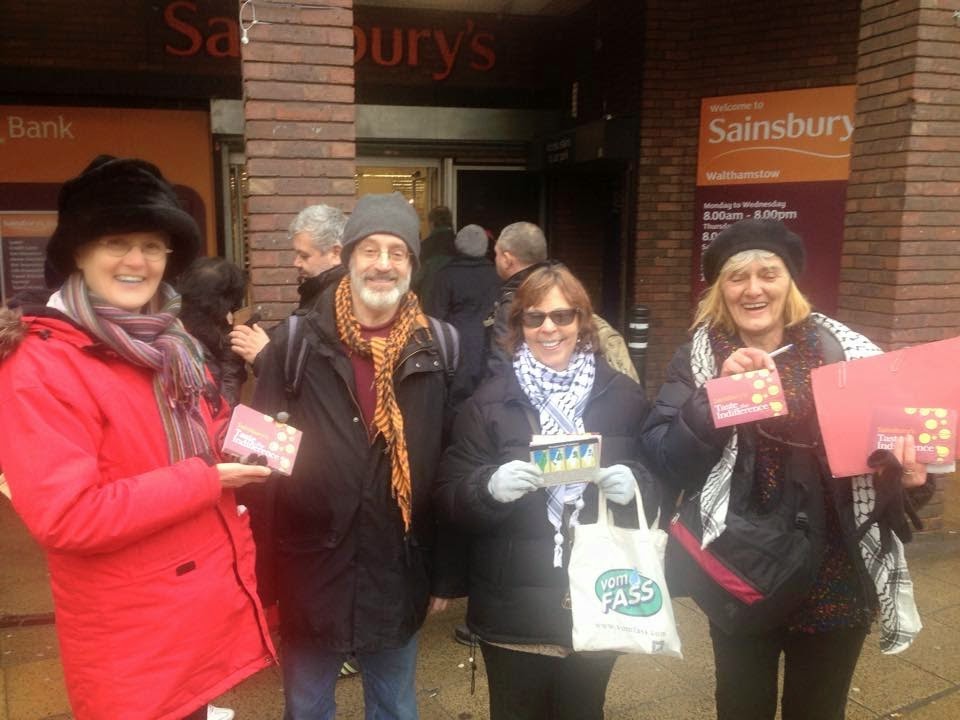 Always read the label: Stop buying goods produced in Israel and in the illegal settlements in the occupied Jordan Valley and West Bank

Talk to the manager of your local Sainsbury’s or write to Sainsbury's Head Office to raise your concerns and ask Sainsbury's to stop trading with companies which help Israel break the law.

Posted by Waltham Forest Palestine Solidarity Campaign at 12:51 No comments:

Demand justice for the Hares Boys

The second anniversary of the Hares Boys’ incarceration on trumped up charges for causing a traffic accident near their village in the occupied West Bank, is approaching.

The accident involved a collision between an Israeli stationary truck and a car driven by a woman from the illegal West Bank Yakir settlement with her three children, one of whom was seriously injured and sadly died couple of weeks ago, almost two years after the crash.

.It is important to note that the Boys, who were age 16-17 at the time, were violently arrested by the Israeli soldiers and secret service agents,

They were abused and tortured during interrogation and then charged with 25 counts of attempted murder, one for each stone allegedly thrown.

It is also important to know that not a shred of credible evidence has been produced against them and that initial evidence gathering at, what was later declared a crime scene, was done by the car insurers!


Five Hares Boys are victims of a major miscarriage of justice which can result in up to 20 years of their young lives being spent incarcerated for attempted murder.

The fact is the Boys have been, from the day one, declared guilty and labelled terrorists by the Israeli media and political leaders,including Netanyahu. .

They have no chance of getting a fair trial from their occupiers and what all justice loving people need to do, is ensure that there is enough pressure by countries, such as the UK, put on the Israeli Government to free Hares Boys. as well as hundreds more Palestinian political prisoners, including children,  held in Israeli jails without a charge.

Israel’ place in the club of Western democracies and unprecedented access to the western markets, need to be linked to Israel’s respect for international laws, including human and prisoners’ rights.  .

Please, visit Hares Boys websites for updates and a host of information including examples of solidarity actions around the world and what you can do to ensure justice for the boys:  https://haresboys.wordpress.com/

Also, join the London Palestine Action protest to mark the second anniversary of the Hares Boys incarceration, which will take place near the Houses of Parliament (exact location will be circulated nearer to the date) on Friday 13 March, between 8.00 -9.30 in the morning,

Posted by Waltham Forest Palestine Solidarity Campaign at 01:26 No comments: