Making Palestine the issue at the General Election!!
Thanks heaps to everyone who made it to the pre-Election foreign affairs discussion at Fresh'a'licious on Fri 23rd April 2010, particularly all those who haven't been to one of our knees-ups before! It was a joy to welcome yet more new faces to the WFPSC fan-base! Three hours later and we were still talking and debating and swapping experiences.... A fascinating evening.
Thanks to Cath Arakelian (Chingford - Labour candidate) for her amazing work at distilling foreign affairs, and particularly palestinian policy, from all the party manifestos, and giving us an insight into her trip to the West Bank in January. Cath also brought us news from Stella Creasy. Through Cath, Stella made assurances about her support for Palestine, although she felt least in favour of the Boycott Divestment and Sanctions campaign (which, to our audience was interesting, as that is the principal part of the Free Palestine campaign that is having internationally positive effects for Palestinian support). Cath did a brilliant job at answering everyone's questions on a range of international issues, pledged her support for all the PSC initiatives and concerns, and proved herself yet again a strong defender of Palestinian rights.
Thanks also to the Lib Dem candidate for Walthamstow, Farid Ahmed, who eventually made it to the meeting having extricated himself from "helping the police" about the Lib Dem office's unusual 'visit' from four members of Islam4UK. Farid managed to answer a lot of questions about what Nick Clegg was up to, and point at some very positive moves by the Lib Dems in relation to Palestine, and perhaps a more rational policy-making mentality than other parties. That remains to be proven once the count is done. However, unusually, the group thanked Farid for his honesty and humility in his answers, and were pleased he openly promised to visit Palestine sooner rather than later whether or not he got into power and that Palestine would be one of his key interests as an MP. He also signed, in ink (!) all the PSC pledges and Cath filmed him doing that so we have evidence! Farid, it has to be acknowledged, has been the most upfront and forthcoming with his Palestinian support since we very first set up WFPSC so we're pleased that, over a year on, he's still treating Palestine as an important issue, and one of upmost relevance to Waltham Forest residents.
The Conservative candidate for Leyton (Ed Northover) was not able to be at the meeting in the end, since he had another engagement at 7.30 that we knew about. He had hoped to come along afterwards and it would have been good to hear how he is getting on with putting foreign policy in the spotlight in Leyton but, nonetheless, it still stands that Edwin has engaged in Palestinian issues and bothered to support our twinning efforts with Beit Lahiya, and engage in the debate on ways to bring about a stable Palestinian state, where his political colleagues don't have such integrity.
Inevitably, however, our main focus of discussion revolved around the intransigence (and ineptness) of British Foreign Policy, irrespective of which political party was in power. To a certain extent, it was felt, foreign policy was a constant that was untouched and unaffected by temporal shifts in political leadership. Most felt foreign policy was pretty much in hock to the US, and thereby (currently at any rate) being pro Israel, whatever UK politicians might wish for otherwise and irrespective of what the rest of the international community might think is wise. We discussed China, Syria, the US, the EU (particularly the dreaded EU/Israel Association Trade Agreement), the African states, Turkey, Iran, Iraq, Afghanistan but all very much from the viewpoint of how UK policy in those countries affects how we then treat Palestine. We discuss BDS (Boycott Divestment Sanctions) and particularly the arms trade: what level of arms trade in the UK is really having an effect on UK foreign policy. In particular we discussed how the UK could view Israel as a "friendly" country now in the wake of the Goldstone report, the passports fiasco and all the flouting of international humanitarian, civil rights and criminal law. Would any party be so bold as to change it's mind on the "friendly" country tag? Would any party "dare" to recognise Israel as the Apartheid state it so categorically has been proven to be?
Most importantly we had people at the meeting who were either Palestinian, or had lived in Palestine or had Palestinian connections. To us, this focus on what Palestinians think and how the UK comes across to them is extremely important and gives us a legitimacy in our work which is vital to WFPSC's well-being. For political candidates to be cross-questioned about Palestine by Palestinians, as opposed to anyone else, is key.
There is much more to do to engage our local politicians in understanding the importance of Palestinian sovereignty to the stability of the Middle East and the diffusing of many of the world's conflicts, not least make Waltham Forest's very diversely international community more at ease with each other. However, we really welcome the time taken by Farid, Cath and Edwin to make the effort already. If only all politicians were so thoughtful and willing.
You can still play your part in making Palestine the issue at the General Election: SEND OFF THE PSC 'PLEDGES' LETTER "PALESTINE IS THE ISSUE" to all your local candidates, and make sure they respond!!
Best wishes
Ellie
Chair, WFPSC
07770 376701
Waltham Forest Palestine Solidarity Campaign
Patrons: Neil Gerrard MP, Jean Lambert MEP, Prof Nur Masalha
Email: wfpsc@yahoo.com
Web: www.facebook.com/wfpsc
Blog: http://wfpsc.blogspot.com
Address: PO Box 64002, London, E17 0HD
Posted by Waltham Forest Palestine Solidarity Campaign at 01:55 No comments:

Your chance in Waltham Forest to discuss Foreign Policy before the Election. FRIDAY at 7pm !!! 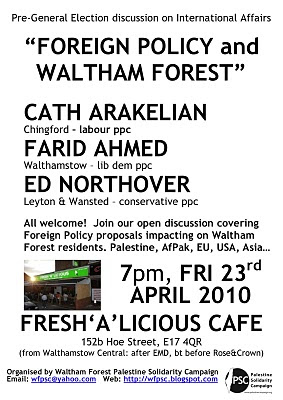 Posted by Waltham Forest Palestine Solidarity Campaign at 20:01 No comments:

Make Palestine a massive issue at the General Election!

Posted by Waltham Forest Palestine Solidarity Campaign at 19:45 No comments: