Stop adoption of IHRA antisemitism definition by our Council

Tonight Waltham Forest Council will vote on whether to incorporate the controversial International Holocaust Memorial Alliance definition of antisemitism into the Code of Conduct for the Councillors and staff.

• Rather than to combat racism, the definition is tailored specifically to silence criticism of Israel.
• It potentially criminalises non-violent and anti-racist activity in support of human rights and international law.
• It severely restricts the right of Palestinians to speak up and to describe and define their own oppression.
• It could potentially leave the Council in breach of the 1998 Human Rights Act and of the European Convention on Human Rights.
• This has apparently been discussed with no consultation with the unions involved, whose members face potential dismissal for falling foul of a problematic document that they have not even signed up to.

Hopefully, Councillors will find the courage to do the right thing and reject the proposed amendment to the Council’s Code of Conduct, and we encourage everyone to urge their councillor to do so.
Tonight at 6.30 WFPSC, together with a number of Jewish organisations and trade unions, will lobby WFC outside Walthamstow Town Hall, against adopting IHRA definition and at 7.30 we will attend the Council meeting where several activists will speak against it.

Some of the reasons for rejecting IHRA definition are given below:

• The text of ‘definition’ is so vague that it fails to define antisemitism and antisemitic acts and behaviours.
• Majority of the ‘working examples’ accompanying the ‘definition’ equate between criticism of policies of the state of Israel and antisemitic hatred.
• The definition conflicts with the freedom of speech, which is a basic right in democratic societies.
• By focusing on obstructing discussion and activism regarding Israel-Palestine conflict, IHRA definition diverts attention from the real threat of violent antisemitic racism coming from the far right.
• The IHRA document has been criticised by many leading lawyers and by authorities on antisemitism who described it as ‘so flawed it should be abandoned’, ‘bewilderingly imprecise’ and even dangerous.
• More than 40 Jewish organisations find IHRA definition unacceptable.
• By adopting it, WFC would fail to make the connection between the struggle against antisemitism and other sorts of prejudice.
• Adopting and implementing the IHRA definition would have significant negative implications for Waltham Forest councillors, employees, and for all residents of, or visitors, to the borough which the Council fails to recognise. 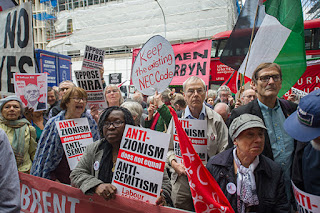